Physically Based Rendering (PBR) is a new buzz word in the world of 3D which just means more complicated terms for us artists to learn. But this is a term which should be exciting for those who work on large projects with multiple scenes and different light setups Physically Based Rendering will speed up moving models from one scene to the next. In theory now the new materials will look proper for most light setups but and practice always do a test render and see how your objects will look.

Even though LightWave is touting this as a new part of their render engine to me it looks a lot like the different materials we got when LightWave 9.0 was released and texture nodes was introduced. Don’t get me wrong this is very exciting to have a major update to the render engine but we need to realize what it took to build. NewTek has spent years trying to improve their really great render engine and now the full integration of materials into the pipeline is amazing.

So what does all this mean to us as an artist?

Good question, here is a quick example and I mean quick that I created with the new materials. 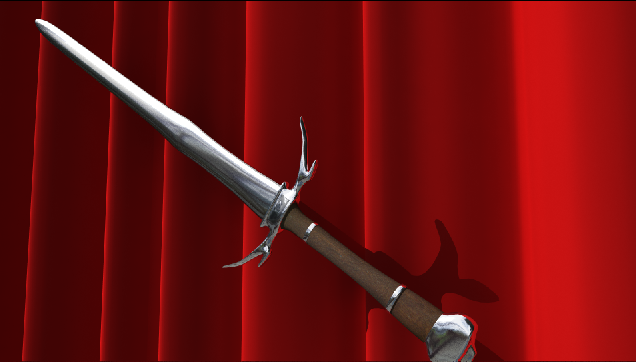 This scene was originally created with LightWave 2015 and had a couple of simple textures added. The blade and the curtain background are using the PBR materials. The blade is setup using conductor which is a metal based material surface. The curtain I used the velvet preset and added a little SSS to get a little highlight in the curls of the curtain.

This surface type is good at making your material look like metal. I used this for the blade with a little bit of roughness to make the reflection become a little blurry. In the old texture this was achieved by adding a micro bump to the material. There was a reflection blurring feature which would to the same thing but at a large cost of render time. The micro bump was used to speed up rendering and fake the blurred texture look. I will have to do some more testing to see if this still hold up in the new PBR pipeline.

Specular is the amount of reflective the surface will act in the scene. Bumping this up to 100% will make it look like a mirror while bring it down will help it look more like unpolished metal. This setting also work in conjunction with the roughness value.

Roughness is the amount the reflection in the surface will be blurred. The higher the roughness value is the less recognizable the scene will be in the surface. A value of 0% is like having a perfect mirror where a value of 100% looks like unpolished metal.

BSDF just stands for Bidirectional Scattering Distribution Function. What a mouth full and another really cool math term which doesn’t mean anything special to us artists.

Now for the really exciting information. This material type seems to be the go to material for just about anything.  You want to create plastic? How about glass, or metal? This is the proper material you should use.  Just adjust the settings and viola it should work in just about every scene you make.

I used this surface for the curtain with a bit of SSS so fold would get a bit more highlights.  You can find a good velvet preset that you can use to get start and modify it.

There are so many settings to this material I’m going to devote a page to this surface and how it is used.

After doing some quick tests.  I replaced all the old textures on the scene to use the all the new Physically Based Rendering surfaces. The scene still needs some work but at 5-10 minutes per render it took longer then I expected.

Over all Physically Based Rendering seems like a good start.  But to get photo real results is going to require a lot more tweaking to get it right. There are a lot of new tools to learn how they work, in some ways the render pipeline is more simplified but in others it is way more complicated.